Black Awareness was a publication authored by Leon “Buddy Glover” in 1968 and 1969. Buddy Glover was a black student who wanted to inform the Gettysburg community of the experience of people of color both on campus and off. The publication features articles, cartoons, and various other aspects. Many of the writings in the magazines feel similar to messages we receive about racism and the search for equality today. Buddy Glover ceased publication after only two issues. He grew tired of attempting to get people to listen to his message when he increasingly felt as though they didn’t care. 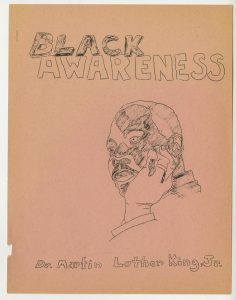 The creation of this publication is important to the postmodern period at Gettysburg. There was an increasing move towards diversification at the school during this time, and Black Awareness shows that diversity. It is a publication which celebrates a minority group of students and fights for acceptance in a hostile environment. This push for the recognition of diversity is an important component of the postmodern period. This was the period of the Civil Rights Movement, and Black Awareness is likely a product of this movement. It is also important because it is engaging critically with its environment. The entire premise of the publication is that Gettysburg College had to improve when it came to accepting students of color. 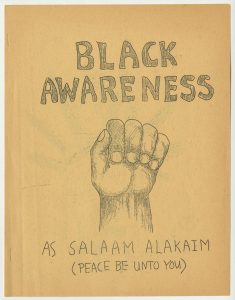 If Buddy Glover believed that everything was perfect, he never would have felt the need to write the publication. It is only when he saw the faults of the culture around him that he felt the need to do his part to change it.

Lastly, Black Awareness is important because it is an engagement with the self. Reflecting on the black experience on Gettysburg campus and in the larger context of the United States is a self-reflexive activity. It requires considering the self and situating it within a certain understanding of your surroundings. When the articles discuss the black experience, they are describing the experiences of the individual writers.

All editions of Black Awareness pictured here can be found at Special Collections on the fourth floor of Musselman Library at Gettysburg College. They are in box R 3.25 entitled Student Protest Publications.