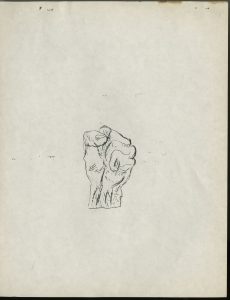 EASTIT is a protest publication written in the 1960s. The authors were jaded individuals who had a great deal to say about the state of the school during the time. The issues are often angry in nature and speak about certain individuals within the administration with whom the writers are frustrated or the administration as a whole. There are articles and editorials as well as cartoons that are often raunchy in their depictions. One shocking aspect of the publication is the Question section in which the writers answer a question, often related to sex, and posit a question that they will answer in the next issue. The administration was angered by the publication of EATSIT and there was a great deal of discussion surrounding the publication.

There are a great many aspects to EATSIT that can be classified as very postmodern in nature. The authors had a complete disregard for authority and wished to protest their viewpoints from outside the confines of the normal systems. Furthermore, they are purposefully shocking to their readers and attempting to do away with the old ways of propriety.

All editions of EATSIT may be found at Special Collections on the fourth floor of Musselman Library at Gettysburg College. They are in box R 3.25 entitled Student Protest Publications.