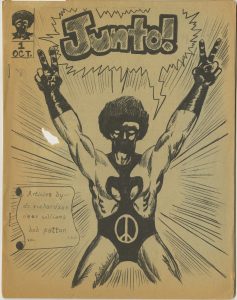 The Junto was a publication that was created by the Student Christian Association. It has many issues that can be found in the College History Alcove in Special Collections at Gettysburg. The writers were often focused on issues of social justice with a Christian leaning. The Junto was very progressive and the makers were not afraid to be controversial in their beliefs. They supported the civil rights movement, the feminist movement, the environmental movement, and the LGBT movement among other things. The issues include drawings, poems, essays, and letters.

The Junto is an important publication because of all the social justice issues that it took on. 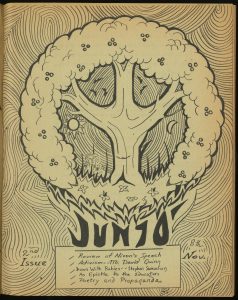 The makers were Christian and thus they believed it was their duty to help those in the world who did not have equal status. They were large supporters of the New York City Field Trip which was an event that brought about a demand for greater diversity in the student body.

The progressive values that are showcased in the publication are ones that are very much tied to the movements that made up the postmodern era. The issues that the students took with authority are as well characteristic of the skepticism that so many exhibited during this time. Chaplain Vanorsdall was the man in charge of the Junto for many years and in the college history he was known as a very active progressive within the administration.

Diversity in the Junto

All editions of The Junto may be found at Special Collections on the fourth floor of Musselman Library at Gettysburg College. They are bound in a book in the College History Alcove in the Reading Room.